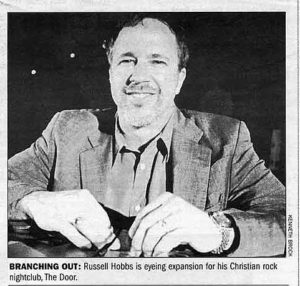 STOCKYARDS DISTRICT — The man who some say was a driving force behind the nontraditional music scene of Deep Ellum in the early 1980s turned his attention to God 13 years ago and now wants to take his Christian rock nightclub to national prominence.

Russell Hobbs opened The Door on the eastern skirts of Deep Ellum in Dallas in May 1998. Although the club, which doesn’t serve alcohol, has yet to turn a profit, Hobbs said business is improving, and he plans to open two more locations in the Metroplex by next year.

The Door will open its second location May 18 in a 5,490-square-foot building across the street from Billy Bob’s Texas in the Stockyards District of Fort Worth.

Hobbs plans to open a third site in the fall of 2002 in Plano.

After that, Hobbs said, he believes the idea of a Christian rock club is different enough to open The Door in “every major city around the country.” He envisions his chain will grow to the size of a Chili’s or Hard Rock Cafe.

“We really think it can be done,” said Jeff Hall, operations manager for the Fort Worth nightclub. “As far as the Christian genre goes, most places are either a church or a mall. There’s no in-between place where people can gather. If we have The Door in every major city, we’ll have access to the smaller touring bands. That’s good, because it can create more of an intimate setting with the crowd.”

The first priority, Hobbs said, is making sure all three Metroplex clubs survive and make money before getting any larger.

Then, Hobbs said, he will pursue investors and corporate support for expansion elsewhere.

Although the Plano site has not been determined, Hobbs said he thinks the nightclub concept will be a hit with area teenagers.

“Deep Ellum and the Stockyards all seem to be places for adults,” Hobbs said. “But suburbia is full of teenagers with nothing to do.”

Hobbs knows something about suburbia.

He was raised in Richardson before eventually taking up residence in Deep Ellum in 1984 when he was in his late 20s. At that time, the area wasn’t developed like it is today, but he managed to open two different clubs, the Theatre Gallery and later, the Prophet Bar. Both clubs have since closed.

After obtaining everything he was seeking — power, money and fame — Hobbs came to the realization that it wasn’t satisfying. He went into a life of seclusion in East Texas.

That’s when a janitor introduced him to God, he said. He eventually found his way back to Deep Ellum after selling his East Texas house and used the money to start The Door.

Hobbs said he’s learned a lot from the successes and failures of The Door in Dallas, and he knows what he will do differently at future locations.

For one thing, Hobbs is trying to simplify what’s being offered at the Fort Worth location, which will be only a performance hall. The Dallas club, which features a coffee shop and theater in addition to the performance hall, is almost twice as big as the location in Fort Worth.

“The new spot will be a whole lot easier to manage,” Hobbs said.