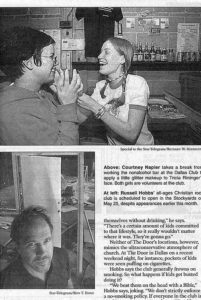 Three years later, though, the club is the envy of other Deep Ellum nightspots, drawing capacity crowds on weekends. It has been so successful that Hobbs has added an adjoining coffeehouse and larger performance space called Next Door.

Now the 43-year-old Hobbs is up against the same kind of odds — but banking on the same kind of results — as he finalizes opening a Fort Worth version of The Door next week in the middle of Cowtown’s drag strip of rowdy bars — the Stockyards. The no-alcohol, all-ages club is scheduled to open May 25.

As with the Deep Ellum club, this will mark the first time a Christian-music venue has ventured into an area dominated by dance clubs and bars. Matter of fact, The Door, Fort Worth — the proper name of the club — is going up at 2521 Rodeo Plaza, across the street from the biggest and most popular nightclub in Fort Worth, Billy Bob’s Texas.

“I welcome it,” says Billy Bob’s marketing director Pam Minick. “I don’t see why it wouldn’t do well here. It’s a teen and young-adult audience, so they’ll fit right in. And it’ll add some diversity around here.”

That’s the main reason, Hobbs says, that he staked out a place in the Stockyards. “It’s an eclectic area, and it will be even more so now,” he says. “I think there’s more of a general market for Christian music in Fort Worth. A lot of the bands we book in Dallas are from Fort Worth, and a lot of the fans are from there, too.”

Elizabeth Skillman is one of those fans.

“I think it’s great it’s opening in Fort Worth,” says the 19-year-old longtime supporter of the Dallas branch. She says she makes weekly trips to the Dallas club. “Christian bands have other places to play around here, like churches, and the Dreamworld Music Complex [in Arlington]. But that’s all they do at The Door, and that’s the kind of stuff me and my friends like. I’ll be there opening night.”

This type of devotion will be the club’s strongest asset, says Joe Dulle, the president and booking agent of the 25-year-old Stockyards staple and country-music club, the White Elephant Saloon.

“It’s a good concept, young people enjoying themselves without drinking,” he says. “There’s a certain amount of kids committed to that lifestyle, so it really wouldn’t matter where it was. They’re gonna go.”

Neither of The Door’s locations, however, mimics the ultraconservative atmosphere of church. At The Door in Dallas on a recent weekend night, for instance, pockets of kids were seen puffing on cigarettes.

Hobbs says the club generally frowns on smoking. So what happens if kids get busted doing it?

“We beat them on the head with a Bible,” Hobbs says, joking. “We don’t strictly enforce a no-smoking policy. If everyone in the club is smoking, we’re not gonna do anything. If two people are smoking and it’s making everyone uncomfortable, we may say something to them.”

Hobbs, who says he’s also planning on opening a Christian-music venue in Plano in the near future, has a long history with the North Texas nightclub scene. While in his 20s and before he found religion, he opened a string of rock clubs in a then-barren Deep Ellum, helping shape the now-thriving area.

Theatre Gallery, Hobbs’ first club, was opened in 1984 on Commerce Street, and it had everything from underground rock shows to plays to poetry readings. His second club, the Prophet Bar, booked similarly left-of-center, alternative performances.

In 1987, when Hobbs found religion and denounced what he said was a decadent lifestyle, the Prophet Bar became prophetically named. Bible studies ruled. Occasionally, a Christian band would perform.

But in 1991, Hobbs’ frustrations with Deep Ellum turning into a commercial zone — a movement, ironically, he helped spearhead — led to him flee Dallas for East Texas, where he spent the next several years finding, he says, “my true calling.”

That true calling turned out to be returning to Deep Ellum and opening The Door — and now The Door, Fort Worth.

The chances of the club surviving in the Stockyards, Billy Bob’s Texas’ Pam Minick says, really don’t vary from those of other live-music venues.

“The key to success is the entertainment it books,” she says. “We don’t have drink specials. What we sell is entertainment, and that’ll be the barometer for their success as well. I really do think it’ll do well here. Cowboys have culture.”