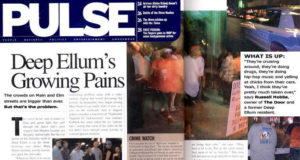 WHAT IS UP:
“They’re cruising around, they’re doing drugs, they’re doing hip-hop music and yelling at chicks from their cars. Yeah, I think they’ve pretty much taken over,” says Russell Hobbs, owner of The Door and a Deep Ellum resident.

-A quote from Russell via the crowding issue in Deep Ellum-