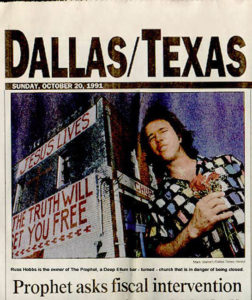 In the heart of Deep Ellum, Russell Hobbs prays for a wealthy savior to help buy his 3-year-old church for skinheads, street people, punk rockers and disillusioned rich kids.

If he doesn’t come up with $75,000 soon, he stands to lose the red-brick building at 2713 Commerce Street that houses The Prophet – a legendary club from Deep Ellum’s glory days, but now a scruffy “street church” and restaurant offering free burgers for the hungry.

In the years since Hobbs, 33, be- came a born-again Christian, a transformation that still raises eye- brows among veteran clubgoers, The Prophet has grown to accommodate hundreds of spike-haired seekers who use its phones and toilets and sometimes show up at evening Bible studies and Christian-music concerts.

“Seven years ago, Deep Ellum was just warehouses and winos. Then the Lord said, just start a church,” said Hobbs. “So it went from a bar to a church. Now on weekends we minister to runaways, throwaways and rich kids on drugs.”

Though the church is paying its bills – unlike Hobbs’ former concerns, the perpetually debt-laden Prophet Bar and Theatre Gallery — the building’s majority owner is selling it and has a deal in the works. That deal would mean eviction for Hobbs, said the owner, who declined to comment further.

Hobbs has been building equity on the church but says he needs $73,000 to buy it outright.

Other Deep Ellum bar owners reportedly are sniffing out the premises – a coveted site among the area’s collection of avant-garde clubs, exotic shops and old ware- houses. And some privately decry The Prophet’s plea for money as a mere publicity stunt.

But Hobbs has other ideas.

“We don’t beg for money like TV evangelists – we pay our bills,” he said. “But I’d like some believers to buy it instead of bar owners. America has enough bars and Chili’s and Bennigan’s and that junk. Maybe some rich Christian guy can save us.”

Losing Deep Ellum’s only church, he said, would be disastrous.

“Here, we see people get healed,- he said. -What God has shown the people of Deep Ellurn is he’s not worried about their hair and clothes. He says, ‘I know you’re hungry for life, and I want you to come to me through Jesus Christ.'”

Last weekend, shortly after hearing the building was up for sale, Hobbs left his troubles behind, journeying to Oklahoma for a camping trip with several like- minded men, some of whom live ill The Prophet’s “Upper Room.” He also left a pair of hand-lettered posters on The Prophet’s windows: This building is being threatened by greed vultures who want to put another yuppie bar in here,” one read. “We need $75,000 to pay off bank and keep this non-profit storehouse here for people who believe in more than this world of temporary satisfaction.”

Sidney Pediford, who stayed behind to keep watch at The Prophet, reckoned those words were vintage Russell Hobbs.

“He’s kind of blunt,” Pediford said. But that sort of talk helped when The Prophet made its peculiar switch from trendy bar to street church.

Street people, Pediford said, ~respect Russ. And a lot of the fad groups come in here for soft drinks, food and religious literature. They can’t go anywhere else because they’re too rowdy or too wild.”

When Hobbs returned home, he brought with him a hopeful sign. While staring at the Oklahoma sky, he saw four shooting stars. That, to him, signifies God is listening.

“He’s personal, and he’s in control of everything,” Hobbs said. “He’s not this faraway grandpa guy who gets mad at everybody.”

And even if The Prophet’s building is lost, Hobbs vows to open a church and concert hall across the street at the site of his former Theatre Gallery.

“We’re gonna stay down here ministering even if we have to meet in the parking lot,” Hobbs said.