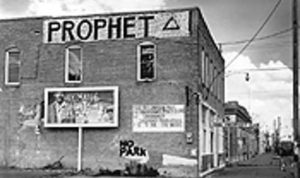 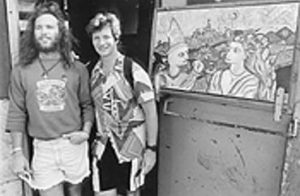 Russell Hobbs is born-again as a club owner

Russell Hobbs laughs a little when he’s told about a mural he allegedly painted a decade ago on the side of what is now the Curtain Club on Commerce Street. Yes, he remembers the mural, the one that simply had two words painted on it: “style,” with an arrow pointing toward Club Dada and the other clubs on Elm Street, and “substance,” with an arrow pointing toward Hobbs’ clubs, Prophet Bar and Theatre Gallery, on Commerce Street. But, he explains, he didn’t paint it.

Sitting in his office at his new Deep Ellum club, The Door, he laughs a little more when he describes the mural he did paint, with the help of a few of his artist friends. He laughs because it’s the punch line to a joke he hasn’t told yet — a joke that’s been making the rounds for the past 10 years.

“It said, ‘Deep Ellum died the day the whore of Babylon cut a deal with the greed possum,'” Hobbs begins. “And it had this big woman on a throne with a scepter and hair like Medusa — the whore of Babylon from Book of Revelation — and this guy with a suit and a briefcase, bowing down and shaking her hand. The briefcase said ‘JS’ on it.” He pauses. “We didn’t say it was Jeff Swaney, you know, but to me, that was prophetic.”

Not too long after Hobbs painted the whore of Babylon on the side of Prophet Bar, Swaney bought the building that housed the club out from under Hobbs; that’s the way Hobbs tells it, anyway. He thought he’d made a deal to buy the building from his landlord, but according to Hobbs, her son cut a deal with Swaney on a tennis court. It was an appropriate gesture to signal the beginning of the end. Hobbs was out, and Swaney was in.

“My lawyer said I could beat it,” Hobbs recalls. “And after a while of arguing about it, I just finally said, ‘Well, I’ve been here eight years, I just need to get away.’ That’s when I yielded, and they gave me some money to get out of the building.” Hobbs took the money and ran, leaving Deep Ellum for parts unknown until he returned a year or so ago and opened The Door at the far end of Elm Street. In the meantime, Swaney and his company, Delphi Group Inc. Real EstateServices, bought up much of the property on Commerce Street.

Recently, as reported in last week’s Dallas Observer (“Art and Commerce Street”) Swaney and Delphi Group initiated a new advertising campaign that encourages consumers to “take a walk on the fun side” of Deep Ellum, an attempt to market Commerce as a safe, friendly, and — don’t forget — funplace for adult entertainment. Not everyone agrees with Swaney’s new plan for Commerce, but most of them do agree that dealing with Swaney is better than working with Hobbs. That attitude isn’t surprising, since by the time Theatre Gallery and Prophet Bar closed their doors for the last time a decade ago, Hobbs had the reputation of a religious zealot who ran everything he touched into the ground. Being a born-again Christian was one thing, but being born again as slightly crazy and entirely too irresponsible is another. He burned his bridges — he acquired the nickname “Hussell Robbs” — then scattered the ashes.

Now, Hobbs is trying to re-create some of the old Deep Ellum he remembers in a different area. Well, it’s still technically in Deep Ellum, but it’s far from the Bourbon Streetatmosphere that fills the gutters of Elm Street every weekend. Adjacent to The Door is a small coffee shop that’s trying to get off the ground, and a record store located next to it recently closed. Hobbs is trying to get something started again, and he knows there will be some failures. He’s just happy to have found the spirit that brought him to the area again.

“The coolest thing of all was on Saturday night,” Hobbs says. “We had four bands playing, a coffeehouse full of all these people, and an art opening going on. People are coming. It’s just like it was when the Theatre Gallery started. People meet and relationships form, where they start a band or they do an art project together or they get married. Or whatever. There’s this sort of thing happening, and to me, it’s naive in a way. It’s about love and art, and, ‘Hey, man, we can change the world.’ There’s this vibe around here.”